The Yin and Yang of EVE: Valkyrie – Part 1 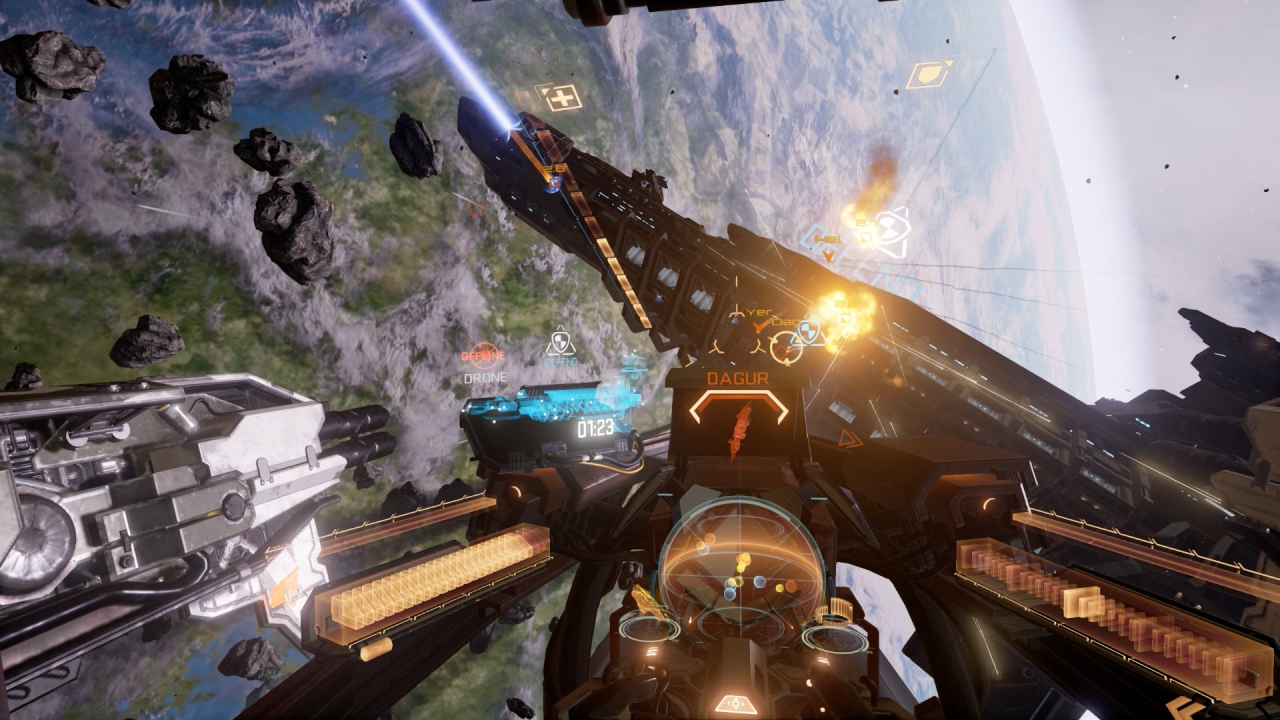 Attempting to develop an online multi-player videogame on any platform is no slight task. Thanks to more than a decade of experience in doing so with EVE Online, the team here at CCP Games is in a stronger position to do so than most. But when it came to EVE: Valkyrie and the brave new world of virtual reality we were faced with a whole new set of challenges. Not least of these challenges was creating a multi-player dogfighting game – taking place over a variety of level maps and featuring multiple ship classes and play modes – that rewards and penalizes players in equal measure no matter what configuration those players chose.

It’s quite a balancing act and that’s why we thought it would be a good time to dig a little deeper into how we went about creating the game in the first place.

Following that we’ll explain the processes involved in making such a complex game (with all manner of gameplay variables) equitable and enjoyable to players of all abilities and regardless of the role they chose within EVE: Valkyrie.

In this first of our two-part article we’re going to start with the creation of the game and the thinking behind the design decisions we made, before delving deeper into the intricacies of balancing the gameplay in part two.

The Birth of EVE: Valkyrie

As many of you will know EVE: Valkyrie started out as a tech demo to explore the possibilities of using VR to deliver an experience based in the EVE universe. This begs the ‘chicken and egg’ question: did it operate purely as a VR exercise in the first place, or was there always an intention to make it a multi-player experience? The honest answer is that it was not really one or the other. Both informed each other as the project grew.

The team put the demo/prototype together to be played on the show floor at Fanfest 2013 and right from the start they decided to build something that connected players in VR. Recognising the satisfaction to be gained from interacting in a virtual world with other real-life players, it was an opportunity that couldn’t be passed up. Alongside the visual immersion, multi-player interaction was one of the key features virtual reality could deliver that the team felt compelled to explore.

The original 5v5 prototype created was, at the start, missing a few traditional team-play features like voice chat or shared objectives, but the incredible sense of presence was enough to know that something with great potential had been tapped into.

The foundations of the prototype began to develop into the full EVE: Valkyrie experience and efforts were made to turn the 3-minute demo into a release title; strengthening the team elements became a core focus. Adding features like comm alerts to communicate on the fly with team mates and a support ship that could heal your squad all allows for a deeper, more cooperative game.

The existence of EVE Online and nearly 15 years’ worth of lore and assets was to prove crucial to the ongoing development of EVE: Valkyrie giving the team a chance to build upon the foundation aesthetic and show it from a totally new perspective in virtual reality.

The levels and environments were designed initially to enhance the VR experience. Environment assets of different sizes and scales were layered to help define the sense of speed. Passing over smaller and larger debris helps the player get a genuine feel for distance.

Asteroids and other traversable structures also litter our world and are placed to allow players to hide from incoming attacks, providing counter play to Valkyries selection of ship classes.

These all contain a strong sense of the EVE identity delivering players a true in-person perspective on the corners of space they have come to know and love while still being accessible to new players not familiar with New Eden.

As EVE: Valkyrie began to coalesce into a functioning multiplayer experience the CCP Newcastle team turned their attention to prioritising specific elements of the gameplay. Valkyrie was always about the sensation of space dogfighting at its core. Pure aerial combat.

As the multiplayer aspect grew and a greater tactical depth began to form around the growing number of playstyles, the game always led back to the strong sense of control over a player’s ship and their engagements with the enemy team.

Features were designed from the ground up to both accentuate a feeling or action in VR, while also making a meaningful addition to the mechanics of combat. Having these pillars underpin the experience helped to shape the priority of content going forward.

With the EVE Online provenance in place, the maps designed and the unique nature of VR gaming and the challenges that presented addressed, what followed was a painstaking process of balancing the game and making it, at once, welcoming, rewarding, challenging and fair.

Join us tomorrow for part two in which we explore how the team tackled the tricky business of balancing the maps, ships and weapon loadouts.