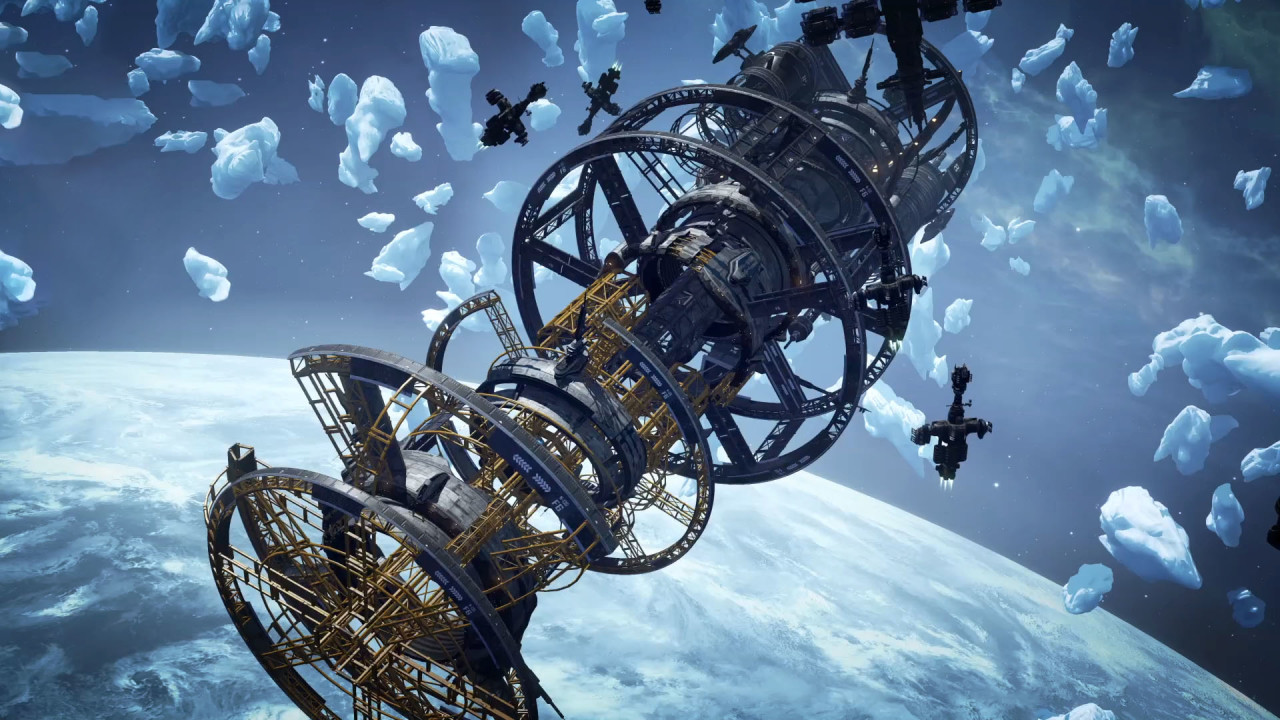 It’s less than two weeks since the new Gateway map went live but already New Eden’s finest pilots are getting to grips with this fascinating, and somewhat chilly, new environment. We spoke to ace pilot Nydwen who specializes in heavy craft to find out how best to use Valkyrie’s heavy artillery in the new map. Take it away Nydwen.

Overview of the Gateway Map

The main bulk of the Gateway map consists of an unfinished jump gate with intricate beams and structures you can use to break missile tracking/locks and also evade players to turn the tide of battle.

As a heavy you must be a bit more mindful of the tighter gaps you can squeeze through. The map is designed to be fairly even-handed to all classes, but with a heavy you need to employ a little more skill when getting into a tight spot. However, by going through a narrow gap and turning around, it means you have your target confined in a small area with little chance of escape should they follow.

In the centre is a ‘core’ structure; a long cylindrical tube which has warp gates fitted at each end that can be used to escape and also for relocating to another area. At the outer edge is an iceteroid field which can provide some great dogfights.

When it comes to ship choice for Gateway, depending on which ships you have access to, I would recommend either the Rhino, Cyclone or – my personal favourite – the Maelstrom. I would stay away from both the Goliath and Gorgon due to the many structures your pod missiles are likely to hit.

This is a fairly straightforward mode of play on the Gateway map. The vast majority of the time TDM ends up with a death-ball of both friendly and hostile ships. Although heavy damage is substantial, I would not recommend being in the centre of this death-ball. With the rebalance changes to heavy hit points you no longer have the ability to soak up as much damage as before.

Your job here is to stay on the edge of engagement range, laying down the fire in order to both kill the enemies and support your team.

Heavies are a threat to you in this map and should be targeted after support. All of this is situational and should you have a fighter shooting you but nobody else, then this fighter has to be dealt with as a priority.

The ideal position from which to attack a fellow heavy is below and behind. This is the hardest spot for a heavy to fire into and with practice you will tip the odds in your favour by doing this.

EMS is another option should your craft have it available. EMP the target and swing around behind and below for maximum effect.

The inner core currently is not used so much in TDM, but it does have the potential to have some great fights in. If possible, draw your adversary into this central tunnel. If you are using one of the ships I mentioned, you are in a very strong position.

Enclosed spaces can help to concentrate both flak and the mortar depending on how close to the walls you can get your target, which results in more damage applied. For those times when it all looks a bit grim, you have your trusty Micro Warp Drive (MWD). With the latest patch, the spool up timer was reduced to around one second, resulting in some sharp exits when required. Do not be afraid to use this but also be aware some people may follow in the hope of an easy kill.

Be prepared to turn around and hit the brakes a little as soon as your warp ends and prepare for any ships incoming. Just remember to have some speed going by the time they arrive. You are going to need this. By timing your brake/boost you can powerslide the heavy to increase its turn rate but central to all of this is your speed.

Start laying down fire when your targets are just beyond your range as by the time your projectiles arrive, the enemy will have most likely just boosted right into your shots.

This is your standard Control mode with points A and C being located on either ends of the central structure and point B is located offset of the middle.

Firstly, I recommend ensuring your team controls point B. This is the central point to the map and anybody wanting to move from A to C and vice versa has to pass through point B or the middle tunnel.

By controlling point B, you control the map mobility. From there you can push to either control points A or C, at will, to capture them and then return to the middle.

Again, the point of a heavy is to control an area of space. What better place to do this than on a control point? While the common thought for heavies is to be out in the open laying down fire, I am a huge supporter of placing heavies in confined spaces which forces hostiles closer – also these confined spaces can help apply extra damage. In the case of this map, that means using the cylindrical structures with solid walls rather than the narrow, exposed beams.

The centre tunnel is used more in this mode and you can find some enjoyable fights in there. Enemies will use the warp gates at either end to move between points which can lead to them flying right by. Feel free to lay down some fire as they pass and then chase after with the MWD.

The warp gates themselves can also provide a chance to turn the tide of battle. We have a couple of options available here. One option, when being chased by a lone hostile is to fly through the warp gate and then hold the brake. Your ship glows as though it’s warping and if your enemy is close they will follow and hopefully fly straight by, at which point you can release the brake, you will resume your warp and you should be on their tail. Don’t forget you also have your MWD available should the initial warp fall short of them.

It goes without saying, but if you do not see the enemy fly by after a second or two, let go of the brake… it’s time to get out of there!

The other option can be used against solo enemies or a group of players. It’s quite simple: MWD either before entering the warp gate or afterwards when you’re already in warp. This ‘double warp’ greatly increases your speed meaning even if they follow they will not catch you. One word of caution while using these warp gates though. The tunnel is a prime site for mines, so be aware.

This is your standard Carrier Assault with the capture points in the same position as in Control. The difference this time is there are an additional two warp gates set out near the middle: one on each side of the structure.

As a heavy, I like to take control of point B for the same reasons as in Control, but with the added bonus that this is the closest point to the carriers. As a result, as soon as the defend/attack phase hits, you’re in a good positon to do something about it.

Again, after taking point B you can move at will to either points A or C to trigger the attack phase. I use the same rules of engagement for this mode as Control, but at the same time keeping some kind of cover in reach at all times.

By maintaining control of B and the middle inner core tunnel, you drastically reduce the other team’s mobility and make it harder for squads that are split to regroup. As always make sure you move to either defend or attack the carrier as soon as the phase is triggered and above all else, have fun! That’s what this game is all about.

A massive thank you to Nydwen for his heavy-handed approach to the new Gateway map. If you want to know a bit more about Nydwen check out his pilot profile.

For more information on the new Gateway map itself and its various cool features we recommend you check out our recent hands-on with CCP Roo.