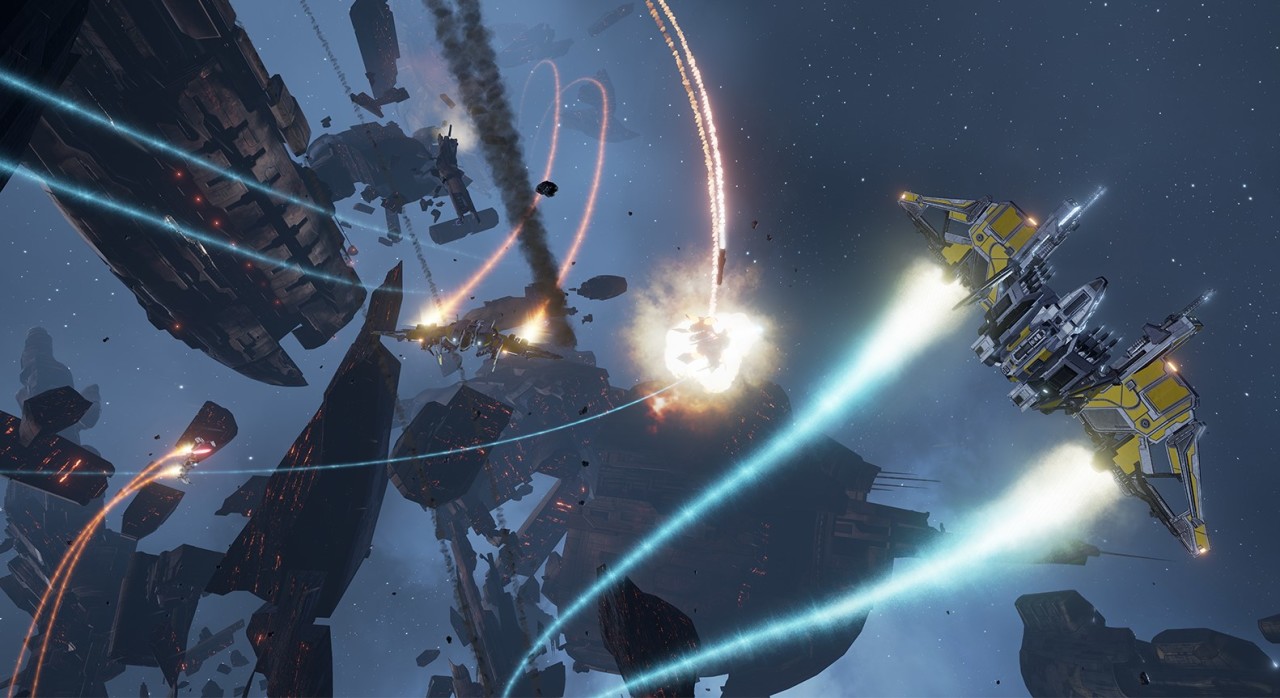 Just joined us in New Eden? Great. That means you’ll be starting to experience the joys of fighter class ships and their missile loadouts. Missiles can predominantly be found in fighters although there are a couple of heavy and support class ships that are also equipped with them.

Like a chat-up line in a romantic situation, depending on how and when you deploy your missiles they can be devastatingly effective and seal the deal or utterly useless and leave you vulnerable and feeling like an idiot.

So here are a few things to bear in mind when you’re messing around with missiles.

The beauty of VR is that it enables you to engage in a unique form of multi-tasking, and nowhere is this better showcased than with EVE: Valkyrie’s head-tracked missiles. When you first play Valkyrie it’s not immediately obvious just how cool the game’s head-tracked missiles are. Gamers are used to staring ahead at the limited window that is their monitor and having to either manipulate a crosshair or rely on auto-targeting to fire a homing missile at an enemy.

When using head-tracked missiles in Valkyrie, that all changes. Regardless of your direction of travel or the action going on in front of you, you can simultaneously look around, identify an outlying enemy, and take it out with missiles while still travelling to your destination or blasting other foes with your fixed, front-facing weapons.

All you do is hold the secondary weapon trigger, look at the desired target and when you get a visual lock you can let the trigger go and the missiles will travel on their merry way while you can go back to concentrate on your original objective. One important thing to remember is that the longer you hold the trigger when locking onto your target, the more missiles will be loaded into the chamber (up to the maximum) so you have the option to just let fly with one or two, or a whole barrage.

Once you get your head around it, it becomes an incredibly useful tool and we would recommend spending some time in Test Arena to fully get to grips with the technique.

So, our next piece of advice would be to just keep lobbing off as many missiles as possible, as soon as possible, right? Wrong!

Tempting though it is to throw everything you have at your enemy, you need to keep your powder dry, rookie. Cool as missiles are, an experienced opponent will hear their missile alarms and have little trouble shrugging off the attack. Consequently, they will then be aware of your presence and come after your ass. Meanwhile you are left with no missiles and a limited ability to fight back.

The element of surprise is crucial when using missiles. Scout the area, choose your target, attack from the rear and only use your missiles when you are sure they won’t miss.

On the Receiving End

As you progress through the game, gaining in experience, and acquiring more ships, the use of missiles becomes a more nuanced affair, but as a beginner, you will need to rely on two basic ways of surviving an enemy salvo of missiles. When you hear the unsettling sound of the incoming missile alarm, trigger your ECM countermeasures (press the SQUARE button on PS4, X on PC), and hot tail it out of there to give yourself some breathing space. When you’re inexperienced and in a blind panic, you just have to learn to be cool and collected enough to routinely use your ECM in response.

A better option, though, is to spend a decent amount of time in Scout Mode getting to know every nook and cranny of the maps and practicing flying at speed in close proximity to the scenery and space debris without colliding with it. It might sound a bit laborious but your environment is your best friend and knowing the lie of the land will pay dividends when in battle. When you’re confident with your surroundings you can, like the experts, shrug off a missile attack by weaving around structures, thus saving your ECM for when you’re in a really sticky spot.

That should be enough to give you a good solid start using Valkyrie’s awesome missile capabilities. A strong grasp of missile handling in the early stages will set you up well to make a real impact when engaging in team play. If you want to know more about team play, head over to our handy guide.