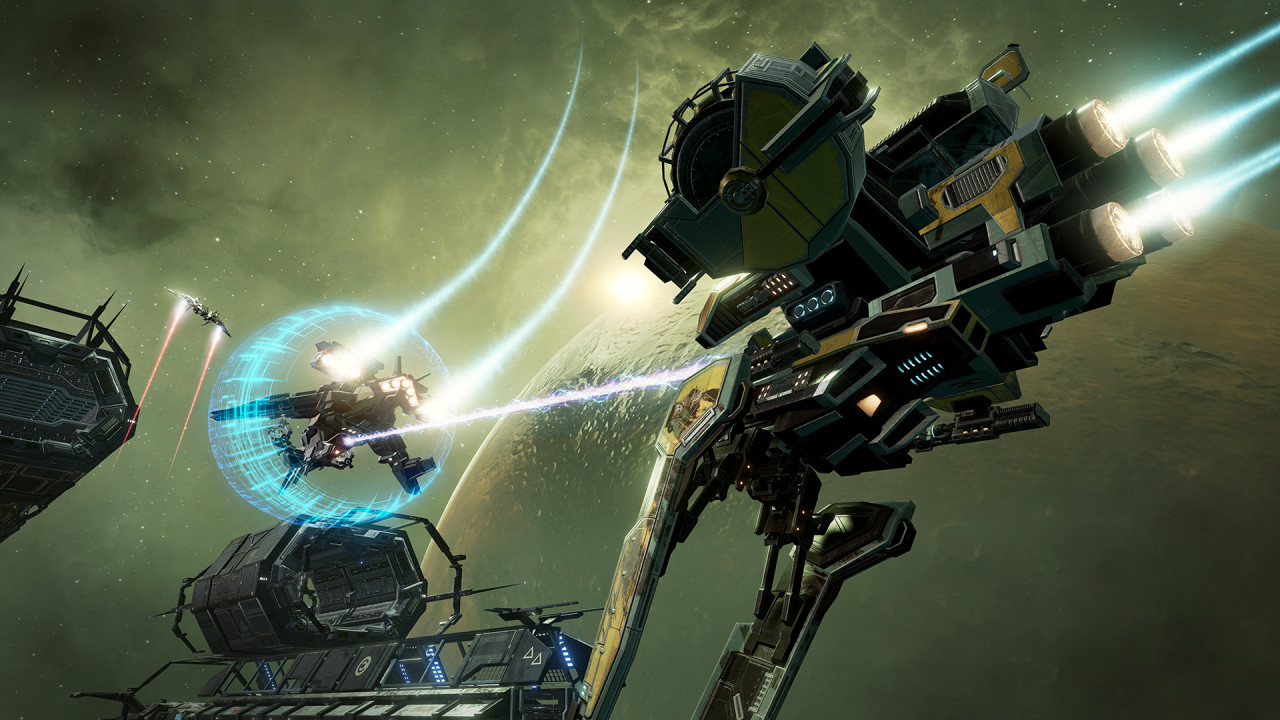 Continuing our series of mini guides on EVE: Valkyrie’s play modes, this time it’s the turn of the support pilots in Team Deathmatch mode. It will come as no surprise to you to learn that we’ve enlisted the help of renowned pilot and regular Valkyrie community contributor Anska, who will pass on her words of wisdom to any would-be medics out there.

I would recommend the following:

In terms of specific support ships, a Guardian is in its element in a TDM situation and would be ably assisted by a second, aggressive support that can also heal, like a Banshee or Revenant (you could even choose a Displacer if you’re happy to switch to a fighter).

As some of you will know, I like to play the medic role so it goes without saying that a Guardian is my ship of choice for a TDM. It has one of the best heal beams in the game, so at least one Guardian is a must. As I’ve mentioned before, there is some benefit to choosing a Displacer. It’s a fighter, sure, but it’s a good healer and you’ll find that other players are more reluctant to pick on a fighter than a support ship.

Be aware of the cooldown on your heal beam. If you concentrate your attention for too long on a single teammate you’ll have to wait for your beam to cool down leaving the rest of the team vulnerable. Use the ‘hot potato’ method of healing, zipping between teammates and administering a little bit of healing at a time to keep them in the fight or give them the opportunity to run.

Never be afraid of getting caught up in a death ball (when all the ships are swarming about in one place). Despite the risks of such a situation, you want to be right where your team is so you can both heal them, and get protection from them while you carry out your work.

Also, don't be afraid to die. Ideally, as a medic, you don't want to get taken out as time in the tubes means you can't heal. However, if making a last-ditch attempt to heal a teammate who’s playing a crucial role in the battle means you will lose your own life, do it.

If you choose to take a more aggressive support role then you want to have mines and spiderbots at your disposal. They are highly effective in TDM mode so choosing a Banshee or Revenant is a good shout. Drop ‘bots and mines in the middle of a death ball and inevitably, in all the confusion, your enemies are going to fly right into them.

Similarly, if you make a mental note of the places beleaguered pilots tend to flee to, you can place the mines and ‘bots there to foil their escape plan.   The Revenant has as additional advantage as its beam has a damage bonus, so you can join in the fight during particularly gnarly encounters.

As in control matches, the coms alerts can be used to great effect during a team deathmatch.

During a frantic battle, you are inevitably going to get into trouble yourself at some point, so having the ability to request some healing is invaluable. Use it in conjunction with the recently upgraded radar. When someone asks for help, they are highlighted on the radar which can save crucial seconds when locating them and rushing to their aid.

If you don’t tend to use com alerts, you really should start. I would recommend checking out the com alerts article to find out how to do so.

When it comes to ship-specific advice, here are a couple of top tips for you:

If you come up against a ship with a phaser, don’t run. Instead stay as close to it as possible. It’s not a good short-range weapon so by sticking to them like glue, you make it incredibly hard for them to get a shot in.

Finally, when in a battle against a Maelstrom, try as hard as possible not to show your front to them. As I have found out to my peril (thanks to Nydwen), the Maelstrom’s mortar can take you out with one shot by blasting you square in the cockpit.

Thank you to Anska for equipping us with yet more survival skills.

Next time we will be taking the heavies to Team Deathmatch mode so keep checking back here.