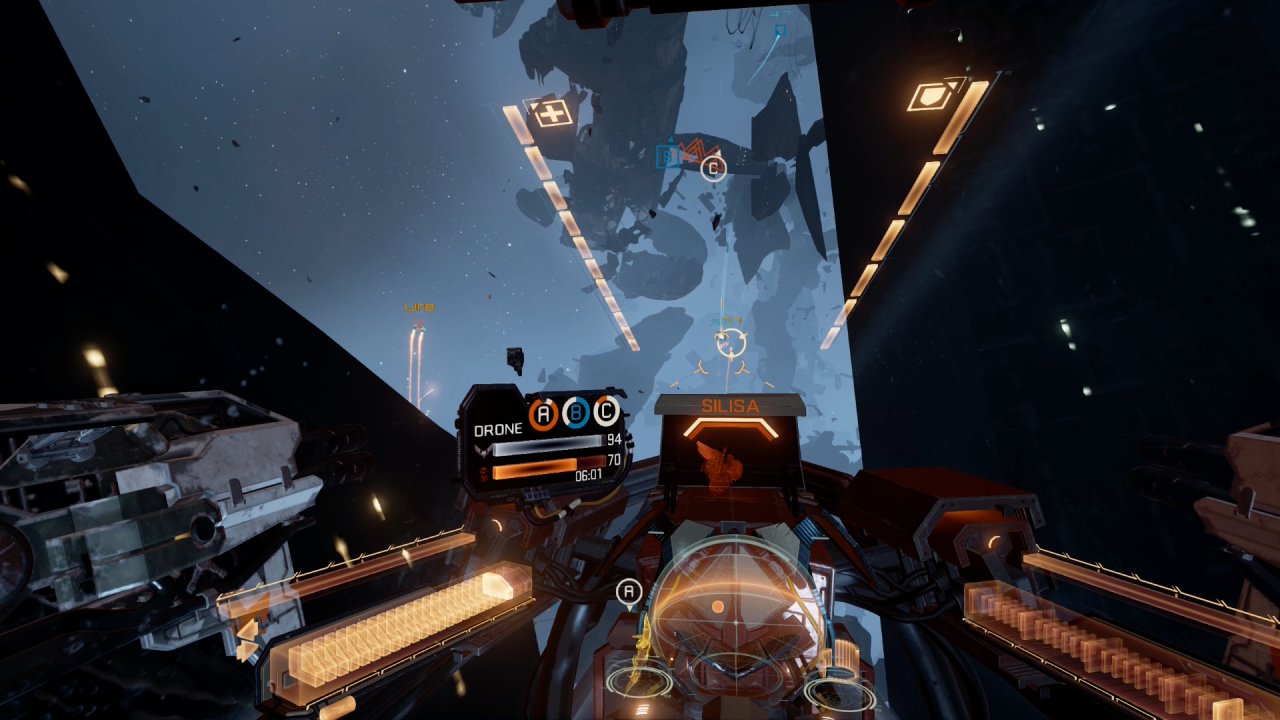 Hello again rookies. It’s time for another one of our mini masterclasses in which we impart some wisdom on the art of battle to those just beginning their Valkyrie adventure. Any experienced pilot will tell you there’s no shame in hiding from your enemy when it’s prudent to do so. Indeed, the use of cover is a crucial aspect of gameplay to be mastered if you want to enjoy success on a regular basis. And using cover isn’t always about running away and cowering in the dark, you can also use it against your enemy.

Any player who has an extensive knowledge of the maps is going to have an advantage in battle. Therefore, as a novice, you need to hold off on diving straight into multi-player battles and instead take a bit of time training yourself. For the purposes of learning to use cover, it’s best to begin with Scout Mode which enables you to explore the maps without any enemy ships attacking. Like a New York or London cab driver, you must be familiar with every square inch of your environment, so we would urge you to travel around each map, forensically looking at its characteristics and the various forms of cover it provides. Once you are beyond rank five and have unlocked the heavy and support class ships, explore the maps with each of them to locate tight spaces and experiment with locations that the smaller ships can squeeze through and those that should be approached more cautiously by the heavies.

Mastering the handling of your ship is imperative and if you can maneuver well you can use areas of light cover as a weapon. Taking the new Gateway map as an example, a substantial proportion of the warp gate is unfinished and so consists of open networks of scaffold. Gaining an intimate knowledge of this structure can be massively beneficial for two reasons. First, pre-learning a fairly convoluted route through the scaffold means that when you are being pursued, you can lead your enemy down this predetermined path. You will almost certainly know this path better than your opponent, leading him to take damage when he hits the structures. Secondly, the scaffold is great for breaking line of sight, making it harder for your enemy to get a lock on you. Even if they do get a volley of missiles off, you can use the scaffold to deflect the projectiles rather than using your counter-measures.

The same is true of the more solid structures on any map, so practice maneuvering in close proximity to solid walls, asteroids, iceteroids and the like. The more risks you are able to take while flying in cover, the more likely you are to lose or damage your pursuer.

Make Yourself at Home

When the designers at CCP create a new EVE: Valkyrie map, a huge amount of time and effort is taken to ensure that it is fair to all ship classes. However, while it may be fair, it does not treat each ship class equally and that’s an important distinction. There is an overall balance to open space and areas of cover with the basic rule of thumb being that fighters and supports are more adept at using cover, while the heavies are designed to work more in open space. It makes sense when you consider that a heavy’s microwarp drive (MWD) enables it to get out of sticky situations without the need to seek cover.

That said, even the heavies can make good use of the scenery. Warp, or simply fly into an area of tight cover (that you have scouted previously so that you know you can safely fit into it) and you can turn around and sit it out until your foe follows you in. They then become a sitting duck and less able to avoid your attack in the confined space. And don’t forget, in the same way that players can use lighter cover to take out missiles, heavies can fly through structures to break the lock-on of any attacking support ship’s buff beam and phasers.

We’ve stressed the importance of scouting the maps and getting to know fixed routes and areas of cover, but the maps in Valkyrie are not dead and static places. These are living environments with floating debris, iceteroids and in some cases, large benign ships just casually going about their business while the battle rages around them. Maps like Gateway, Shipyard and Forge have ships that act as areas of moving cover. Generally providing a fairly large area of cover, they can be a useful escape route when one of them lumbers into view just at the point where you are taking a beating. And if you’re feeling particularly cheeky, you can lure an enemy into a ship’s flight path and EMP it, leaving it helpless and the victim of what we like to call an STA (Space Traffic Accident).

We hope this has been of some use to you. You might also like to get to grips with the use of missiles in Valkyrie, in which case you should check out our previous mini masterclass on the subject.

Also, you can find out how the designers here at CCP carefully create and balance the game’s maps in our two-part feature.